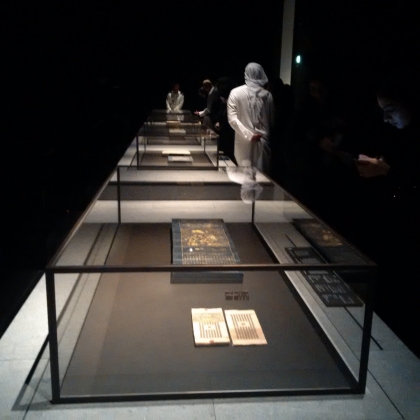 View of Artworks on Display at Louvre Abu Dhabi, Photograph by Gail Lord

In his opening remarks the Chairman, his Excellency Mohamed Khalifa Al Mubarak of Abu Dhabi Tourism and Culture Authority, said that Louvre Abu Dhabi is about more than tolerance, it is about acceptance of other cultures and religions. Jean-Luc Martinez, president of the Louvre in Paris, said the new museum was designed "to open up to others, to understand diversity" in a "multipolar world".

Building upon a preliminary architectural program concept, Lord was commissioned in 2006 by Abu Dhabi Tourism Development and Investment Company (TDIC) to refine the space program and provide a concept plan and facilities strategy. We continued our work with the cultural planning for Saadiyat Island and by completing the initial master plan for the Zayed National Museum (2008), scheduled to begin construction in December. Lord Cultural Resources is honoured to have contributed to these projects in the United Arab Emirates.

GAIL LORD SPEAKS FROM ABU DHABI ON THE MUSEUM'S GLOBAL IMPACT, ITS SOFT POWER POTENTIAL, AND LORD CULTURAL RESOURCES' ROLE IN ITS CREATION.