Cultural News is a monthly global round-up of what's happening in culture to help you be up to date with current topics and trends. Excerpts are directly quoted from the articles – here you can browse through the featured stories and access the full issues. 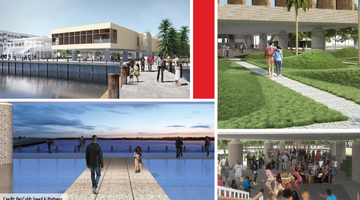 As January draws to a close and we begin to mark Black History Month, this issue of Cultural News features the International African American Museum. Construction has begun on this prestigious project, which has been designed by Pei Cobb Freed & Partners to honour the site at which enslaved Africans were brought into the US. Initially proposed in 2000 and now scheduled for completion in late 2021, the 41,800sq ft (3,900sq m) facility is being constructed on Gadsden’s Wharf in Charleston, South Carolina. It is estimated that up to 80 per cent of African Americans in the US today can trace their ancestry to the wharf.

“For many Africans headed into the forced labor of slavery, Gadsden’s Wharf was the beginning, the landing place, after a treacherous Transatlantic journey. The International African American Museum at this site is an incredibly important opportunity to connect America — especially the nearly 80% of African Americans, that can potentially trace an ancestor to arrival in Charleston — with the stories of ancestors whose names we will never know,” said Joy Bailey Bryant, Vice President at Lord Cultural Resources.

Lord Cultural Resources is proud to be a trusted partner with IAAM, having completed the Business Plan in 2018 in preparation for groundbreaking.